On 27 October I attended the Cafe Society Awards with Inge Loker. I was very excited to have won two tickets to the Awards through Illovo Sugar SA’s Facebook page. It is the highlight of the year for those coffee shops and restaurants who take pride in producing a superior cappuccino. It was certainly a highlight of my year to be there to see the winners firsthand. I love getting the booklet that the Sunday Tribune produces every year listing all the coffee shops and restaurants that the judges visited and reading what they have to say. 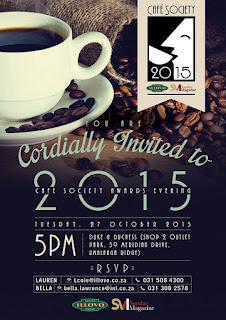 The Cafe Society Awards are sponsored every year by Illovo Sugar SA and the Sunday Tribune and a lot of hard work goes into organising the judges and receiving their feedback. Many meetings are held and sometimes a return must be made to a coffee shop or restaurant for final decisions.
This year the Cafe Society Awards were hosted by Duke & Duchess Motorcycles (motorcycles – coffee shop – clothing store). Duke & Duchess is situated at 2 Outlet Park, 59 Meridian Drive in Umhlanga and I definitely need to return for another of their cappuccinos and more of their food. The food was amazing! Mini Wildebeest burgers, tomato soup in shot glasses, pulled pork wraps, chicken skewers and mini beef bunny chows. There also was a fun sweet table. I had one of their cappuccinos and also tried an iced coffee which seems to be a signature drink as I saw so many people having. 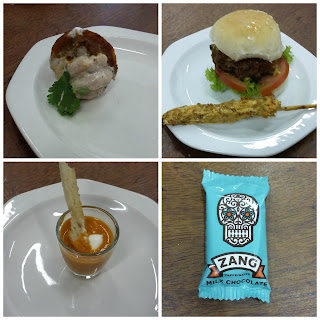 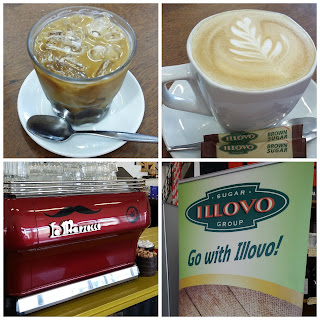 The emcee for the evening was Kevin Minter-Brown of East Coast Radio and he was also one of the judges. We were also addressed by Aakash Bramdeo the Editor of the Sunday Tribune and Darrell de Wet the Market Manager of Illovo Sugar SA. They are both very pleased with the way the Cafe Society Awards has grown and the standard of cappuccinos produced in Durban and surrounding areas.
We were not allowed to say who the winners were on the night as all the information and winners were going to appear in the Sunday Tribune magazine. I can obviously now safely say as it is Sunday and the newspaper is out.
Here are the winners of the various regions :
South
1. Beaver Creek Estate, Port Edward
2. Tea @ Baytree, Shelly Beach
3. Mojo’z Cafe, Shelly Beach
North
1. Duke & Duchess, Umhlanga
2. Republik, Durban North
3. Wonderland, Salt Rock
Inland
1. Terbodore Coffee Roasters, Curry’s Post
2. The Olde Duck, Underberg
3. Essence Deli Cafe, Pietermaritzburg
Durban
1. Lineage @ Stretta Cafe, Hillcrest
2. The Factory Cafe, Glenwood
3. Bean Green, Glenwood
Best Barista
1. Musa Magwaza from Lineage @ Stretta Cafe, Hillcrest
2. Sfiso Gumede from Republik, Durban North
3. Shawn Mushohande from Factory Cafe, Glenwood
Highly Recommended
Durban
Jacksonville, North Beach
Cafe Jiran, North Beach
Mark Gold, Morningside
Parc Cafe, Glenwood
North
Old Town Italy, Umhlanga Ridge
It’s All Good, Durban North
Science of Coffee, Ballito
Zara’s Cafe, Ballito
South
Jaxx, Port Shepstone
Burlesque Cafe, Ramsgate
Inland
Coffeeberry Cafe, Pietermaritzburg
Barbs Cafe, Nottingham Road
Well done to Craig Charity (Lineage @ Stretta Cafe) for this amazing achievement of winning two years in a row. Big congratulations also to Musa Magwaza (Lineage @ Stretta Cafe) for picking up the title of Best Barista. Hillcrest is officially the place to get the best cappuccino so head to the Colony Shopping Centre 50 Old Main Road. You can also get divine cappuccinos at Lineage Coffee in Waterfall at the new Watercrest Mall. 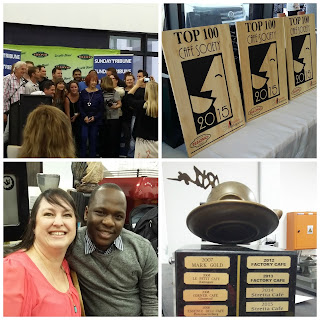 Thanks so much Illovo for the fabulous evening and for my new Carrol Boyes mug and for the syrup that is perfect for homemade waffles. 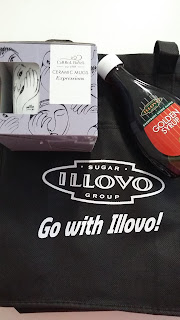 I recently had the privilege of attending the media lunch at OSA Restaurant situated at Fairmont Zimbali Resort and Lodge on the beautiful Zimbali Coastal Resort & Estate. The all-new OSA Restaurant serves authentic Indian fusion cuisine lovingly prepared by chef’s Seelan Naidoo, Melanie Moodley and Nesar Noorullah. A bit of background on the three chef’s creating the cuisine for OSA : Seelan Naidoo is the Chef De Partie (station chef or line cook – yes I had to look it up), Melanie Moodley is the Senior Sous Chef and Nesar Noorullah is the Executive Pastry Chef. Joining us for the media lunch was Executive Chef Dean Uren who oversees the resorts kitchens – 11 kitchens and a 77 member kitchen brigade.
Maybe it is just me, but when Indian cuisine is mentioned I immediately think …… HOT! I don’t do too well with hot as I can’t taste the flavours and all I feel is my mouth on fire. If you are like me you can relax and make a booking straight away as this Indian fusion cuisine is full of flavor and spices and I didn’t grab for the drink once.
I am getting ahead of myself though and must mention that before we all sat at the decorated table to try out all the dishes, we were first gathered on the upper level of the restaurant. While we were seated on the fabulous circular couch we were served a delicious Tomato Shorba (aromatic tomato soup) as a pre-cursor of the flavours yet to be experienced.
Then an excited bunch of happy, chatting people made their way down the stairs to sit at the table and experience more Indian fusion flavours. The comprehensive menu at our places showed the dishes to try and I wasn’t the only one who thought that we would have to choose from the menu which dishes we wanted. In fact I tried everything on the menu except the Rock Cod Tikka (love fish but always scared of bones).
There were three Amuse-Bouche (bite sized portion of food served before a meal or in between courses) – Chicken Liver Tikka, Crispy Pur Prawn and Lamb Samosa. All three were amazing in their differing flavours and textures and I would have loved to eat more …… but there was still more food to come.
Next up to try were the curries – Butter Chicken, Lamb Rogan Josh, Prawn Korma and Paneer Tikka Masala. Everything was tender, saucy and beautifully spiced. My favourites were the chicken, lamb and prawn but I wasn’t keen on the paneer (just not something that I am particular to).
Tandoori Grills – Chicken Tikka, Rock Cod Tikka and Kashmiri Lamb Chaape (lamb chops marinated in Kashmiri spices). Loved the chicken and the lamb and in fact I had two lamb chops. I didn’t try the rock cod but others were making appreciative sounds at the flavours. There was rice and vegetables available to have with the curries and grills and I did have a tiny taste (yum) but had to keep space available to try the rest of the menu.
By this time I was wondering how I was going to fit in dessert but when you see that one of them is Crème Brulee you definitely have space. We were first served a wonderful Kiwi Lassi as a palette cleanser and then it was onto the dessert.
Indian Dessert Collection – Cinnamon, Chai and rose flavoured Crème Brulee, Golden Gulab Jamun (soft sponge soaked in sugar, pistachio, almond and golden leaf) and Kesari Kheer (rice pudding). Number one for me was the crème brulees (divine) with the crisp cracking top and smooth custard interior. The Golden Gulab Jamun had the texture of a doughnut and was lovely with its sugary sauce. The Kesari Kheer was not something I would order as I like sweet desserts but it did have an interesting texture.
As a finale to our awesome meal we were served the OSA Restaurant’s Signature Chai Tea.
Take a drive out to Fairmont Zimbali and experience for yourself the delicious flavours of Indian fusion cuisine.

Bookings are essential
Contact the Dining Concierge Desk 032 – 5385000
or email This email address is being protected from spambots. You need JavaScript enabled to view it.
5 Corkwood Drive
Zimbali Coastal Estate
Ballito
If you were asking “did she have coffee?” Well of course I did! A lovely cappuccino served in a beautiful cup. After all I do Run On Coffee. 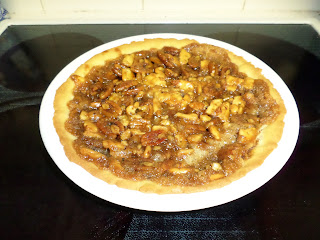 This is another recipe from the book my mom-in-law made for Neil. We all know that pecan nuts are not cheap but for 1 ½ cups of pecan nuts you can make 3 pecan nut pies (medium sized foil plates) or 33 small tartlets which is very good. 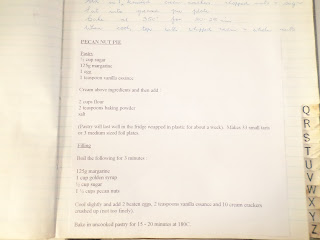 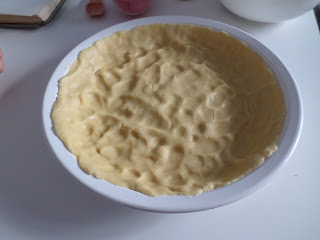 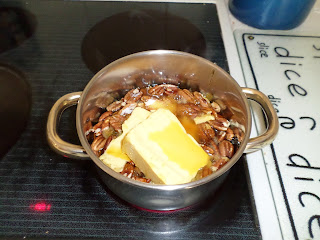 Divide up the filling into the uncooked pie shells and bake for 15 – 20 minutes at 180C. 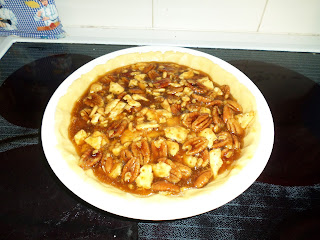 You can eat it plain or with a dollop of cream. Neil likes to also have a piece with a scoop of vanilla ice cream.